Transportation Options for Getting to the Convention Center During the Show 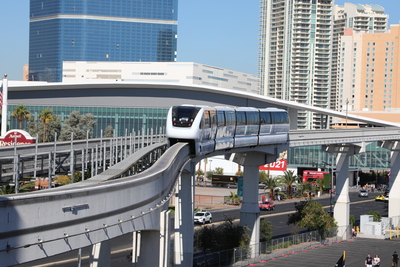 The monorail is a great option for getting to the SEMA Show each day. Trains arrive every few minutes and will begin operation at 6:00 a.m. on SEMA Show days (Tuesday–Friday, November 1–4).

There  are  seven  stations  along the Las Vegas Monorail route. With a  total  of  nine  running  trains,  one  train  arrives at each station every few minutes.

The extended Show hours are:

There will be three designated transportation hubs where ride-sharing services, such as Uber or Lyft, and taxis will be able to drop-off and pickup quickly and easily.

There are three designated drop-off and pick-up areas.

Limited parking is available and rates are subject to change without notice. Plan in advance if you will be commuting to and from the Show in a personal vehicle. Updated parking information will be available on www.SEMAShow.com, in the mobile app, or by calling the Las Vegas Convention and Visitors Authority at 877-VISITLV or 702-892-0711.

Limited parking at the following locations:

The complimentary morning and afternoon hotel shuttles transports Showgoers to-and-from the Las Vegas Convention Center and official hotel partners. Hotel shuttles, which will run every 20–30 minutes, carry an average of 55 passengers and will be marked with a route number. Route numbers will coordinate with which hotel properties they service.

A complete list of hotels, pickup locations and route details are available at www.SEMAShow.com.

The complimentary SEMA-to-AAPEX shuttle service transports Showgoers to-and-from the SEMA show at the Las Vegas Convention Center and the AAPEX Show at the Sands Expo Center.

Visit lvloop.com/tickets to purchase tickets for rides departing from Resorts World. Hours of operation will vary based upon event calendar at the Las Vegas Convention Center.

Shuttles will run every 15 minutes.

The LV public bus service runs from downtown Las Vegas, to the LVCC, and to the Strip. Service starts at 7:00 a.m. on days with major conventions at the LVCC. Service includes 18 stops between the LV Premium Outlets in downtown, to the City Parkway, to the LVCC, to the Fashion Show Mall/Bellagio/Excalibur/Mandalay Bay and to South Strip Transfer Terminal. Visit www.rtcsnv.com for details.

Shuttle service to McCarran International Airport will run every 30 minutes. The  airport shuttles will pick up at Majestic Lot (across the street from the West Hall) and the Bronze Lot.

Shape Your Career Path With More Than 70 Show Education Sessions

Register Here for the 2022 SEMA Show