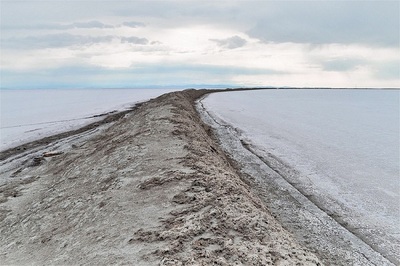 The Salduro Loop dike at the Bonneville Salt Flats separates private land from the federal land where racing and other recreational activities occur. Two breaches in the dike were repaired by the Save the Salt Foundation to stop salt brine pumped onto Bonneville during the winter months from inadvertently flowing into the Salduro Loop.

The Salduro Loop dike was created in 1917 to separate a large swath of private land from the federal lands where racing and other recreational activities occur. The private land was available for potash mining until I-80 was constructed in 1972. The two breaches were made at the request of the racing community to allow vehicles to transit the Salduro Loop from the western to the eastern side of Bonneville.

The larger Restore Bonneville initiative is a collaboration by SEMA and the Save the Salt Coalition—a collection of companies, organizations, individuals and land-speed racing teams—and the U.S. Bureau of Land Management (BLM), Utah Department of Natural Resources (DNR) and its Utah Geological Survey (UGS) division, and Intrepid Potash, Inc. The goal is to increase the amount of salt deposited onto Bonneville during the winter pumping season.

The Bonneville Salt Flats in northwestern Utah is the densely packed salt remnants of an ancient lakebed formed over thousands of years. It is a unique stage set for movies and commercials, and also possesses rare physical qualities that make it the perfect venue for land-speed racing. Since 1914, hundreds of land-speed records have been set and broken in a variety of automotive and motorcycle classes. Speed Week, the marquee event at Bonneville, began in 1949 as scores of racers and thousands of spectators descend on Bonneville in the quest for records.

Bonneville is also a crucial natural resource for potash used primarily in fertilizers. To obtain potash, salt brine is collected in large solar evaporation ponds from which potash is separated out and processed. The remaining salt is stored and may then be pumped on Bonneville as salt brine.

Beginning in the ’60s, the BLM issued leases to the north of I-80, where motorsports racing and other recreational activities take place, allowing salt brine to be collected in open ditches for commercial potash processing. The mine operator began pumping the processed salt back onto Bonneville in 1997, but the Restore Bonneville program will help address salt losses that occurred before 1997 when the potash project was operated by previous companies. The racing venue was more than 13 miles in length in the ’60s but is now 8 miles or less.

Last year, nearly $1 million in state and federal funds were released to restore the Bonneville Salt Flats, funding the installation of scientific equipment to monitor the success of the pumping program and a new well to help prepare the salt brine. SEMA and Save the Salt are pursuing additional government funding in 2022 and 2023 to save Bonneville.

While the bulk of the restoration funding will come from federal and state appropriations, the repairs to the Salduro Loop dike were paid for by the Save the Salt Foundation. Financial contributions from the racing community are gratefully accepted at www.savethesalt.org, a 501(c)(3) organization.