While most members of Congress were enjoying an extended Thanksgiving break with their families, U.S. Representative Jake Ellzey (R-TX) kept a busy schedule meeting with his constituents. Rep. Ellzey visited Summit Racing in Arlington, Texas, for a tour of their retail super store, order fulfillment center and distribution center. Summit Racing is headquartered in Tallmadge, Ohio, although the company has opened three other facilities, including its Arlington location in 2017, which is their largest facility at nearly 1 million sq. ft. Rep. Ellzey’s visit provided the congressman a chance to learn more about the specialty automotive aftermarket and the role the industry plays in Texas’ 6th Congressional District, which is located both to the south and west of Dallas and includes parts of Fort Worth and Arlington. 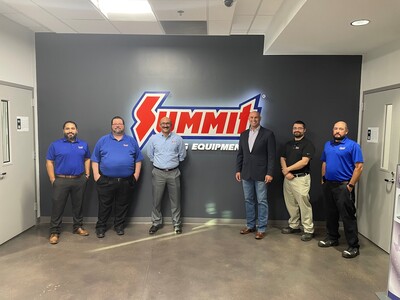 “The tour of Summit racing was nothing short of remarkable,” said Rep. Ellzey, “You all have a tremendous facility, but what was most impressive was all of the employees. The afternoon I spent there, I could tell that everyone cared about their job, each other and the customer. I am glad that Summit Racing is in our district. It is something we can all be proud of, and I look forward to rebuilding my ’79 F-150 with a little bit of help."

Rep. Ellzey is a native Texan, and is one of the newest members of Congress, as he won a special election in July 2021. Prior to running for elected office, Rep. Ellzey served 20 years as a Naval aviator flying H-60 helicopters, F-14 Tomcats, F/A-18 Hornets and Super Hornets in defense of our nation. He was deployed nine times during his military career with five combat tours over Afghanistan and two in Iraq.

The Congressman logged more than 800 carrier landings and served a tour as a Joint Terminal Attack Controller on the ground embedded with Navy SEALs. Following his tour as Commanding Officer of Strike Fighter Squadron, he served as the Air Boss on the USS Ronald Reagan. After his Navy career, he served Texas as a Commissioner of the Texas Veterans Commission, State Representative of the 10th District of Texas, ran a small business and worked as an airline pilot.