Skip to main content
What Has SEMA Done for You Lately?

SEMA concluded the annual SEMA Show on Friday, November 5, noting the end of the Show represented the successful conclusion of the largest North American automotive trade show since the pandemic shut everything down in 2020. 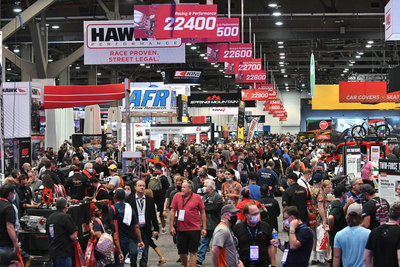 “The industry was clearly excited to be back in-person at the SEMA Show, both to capture business opportunities and to network and celebrate the world’s greatest collection of innovation on wheels,” said Chris Kersting, SEMA president and CEO. “Our industry was waiting to reconnect and the SEMA Show was a welcome homecoming after nearly two years apart.”

“We were excited to see our old friends and colleagues after being apart for so long,” said Kathryn Reinhardt, director of retail marketing, 4 Wheel Parts. “We did a lot of business at this year’s SEMA Show. It was clear that our industry was ready to meet and had two years of innovations to show off.”

As the first, large automotive trade show in North America since the pandemic, automotive manufacturers launched new vehicles, celebrities unveiled high-profile restyles, and exhibitors showed off their latest innovations. Celebrities and their vehicles were out in force at the SEMA Show, including Ant Anstead, host of “Celebrity IOU: Joyride,” showcasing a custom ’62 Buick that has been converted into an electric car in collaboration with American actor James Marsden. Comedian Jay Leno helped unveil a ’69 Ford Mustang restoration for singer Keith Urban in the Ford exhibit, and actor Sung Kang unveiled his Datsun 240z “Safari” in the Nissan booth. Not to be outdone, Toyota introduced their “TacoZilla” Tacoma truck camper, Chevy brought their “Chevy Beast,” a concept vision of the ultimate in high-performance desert running, Mopar debuted two customized concept trucks and Lexus had the North American show premier of the new LXF Sport at the SEMA Show.

The trade-only show brought manufacturers and buyers back together to experience the latest vehicle customization innovations to bring to customers in 2022.

“Our industry has embraced electrification,” said Tom Gattuso, SEMA vice president of events. “We saw electric vehicles and electrified vehicles in every hall at the SEMA Show. Our industry is on the cutting edge of technology. Products you see at the SEMA Show often become standard and mainstream five to 10 years after it debuts at the Show.”

Other SEMA Show highlights included the largest collection of Chip Foose-built vehicles featured in a special corral that highlighted some of the most influential and important vehicles created at Foose Design; a display of over 50 off-road racing vehicles ranging from motorcycles to trophy trucks in SCORE’s “Baja 1000 Experience”; an exclusive West Coast Customs-edition wide-body kit on a Dodge Charger and a Dodge Challenger in the West Coast Customs Experience; and interactive driving demos in the Hoonigan Burnyard Bash and the “Ford Out Front” experience.

Visit www.SEMAShow.com for information about the 2022 SEMA Show.

What Has SEMA Done for You Lately?