Hemmings is auctioning an ’81 Chevrolet Suburban dubbed “Big Green.” The Suburban traveled across the country to be improved into a vehicle capable of being driven daily. 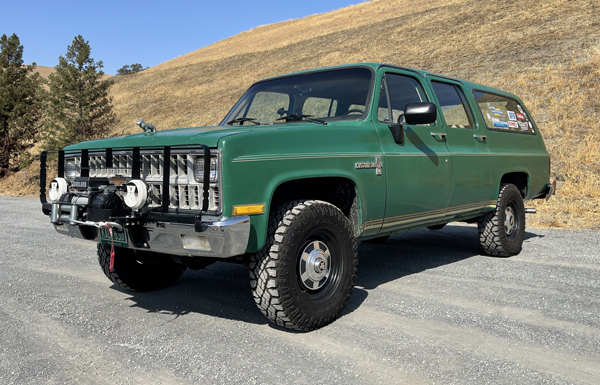 “We surveyed our readers and watchers, and the number-one thing they wanted to see from us was road trip content,” said President and Publisher of Hemmings Motor News Jonathan Shaw. “Originally the show was going to take place on the West Coast, but we had so much support for our cause that it’s spread to the entire United States.”

After being picked up from GR Auto Gallery in Grand Rapids, Michigan, the Suburban made its way to Lansing, Michigan, where racer Kevin Wesley and son Parker helped change the first of many parts: the alternator. After the alternator seemed to function properly, a 500-mile journey followed to Rockford, Tennessee. There, more improvements began with Silver Sport Transmissions.

The team at Silver Sport swapped the old four-speed manual transmission for a Tremec TR4050 five-speed and a 205 transfer case. Of course, taking on a challenge like that doesn’t come without some speed bumps, so Big Green hit the road again.

This time, its journey would take it 400 miles to Memphis for the installation of an Edelbrock fuel injection system. The Suburban received ProFlo 4 electronic fuel injection, an intake manifold, a distributor and plug wires, valve covers and an air cleaner as well as a digital dash at the Comp Cams facility.

“The EFI system and the transmission alone allowed us to travel at modern highway speeds while at the same time improving our fuel economy by over 35%,” Shaw said.

The next stop took Big Green to Fort Worth, Texas, to receive an air conditioning system from Old Air Products. The A/C proved to work well as Big Green made its way from Texas to California for stops at SEMA headquarters, Air Flow Research and Classic Industries.

Air Flow Research provided new heads for the 350 V8 Quadrajet-carbureted engine. Classic Industries donated a dash pad, an instrument bezel, a headliner, door seals, a steering wheel and a new vinyl floor mat. At SEMA headquarters, Kathryn Reinhardt from the SEMA Board of Directors talked about how and when Big Green will be auctioned off for charity.

“All of us here at Hemmings, along with our SEMA partners, have put a lot of time and effort into this old truck to make it something special,” Shaw said. “Thus, we hope the next owner won’t see it as a collector vehicle but instead as a wonderful old truck that can log another 100,000 miles and then be kept on the road for decades to come.”

The Suburban is currently being auctioned on Hemmings own auction site and will conclude during SEMA week on November 3, at 6:00 p.m. (EST).

Car Builders: Register for Battle of the Builders Before October 14