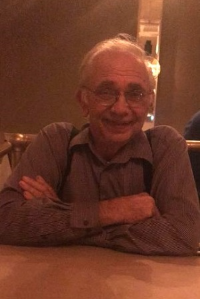 He was the beloved husband of Judith E. (Ford) Cole, with whom he celebrated their 48th wedding anniversary on April 19, 2018.

Bill was raised in Tewksbury and graduated from Tewksbury High School. Following graduation, he attended Lowell Tech, where he received his degree in Business Management.

In 1970, Bill founded and operated Yankee Custom, a full line truck, van and SUV accessory-supply company with locations in Tewksbury, Saugus, Brockton, Nashua, NH, and Portland, ME. Bill started the company in his garage, where he specialized in the fabrication and installation of wood framed aluminum truck bed caps and enclosures. From those humble beginnings, Bill expanded the business and its offerings to what is now considered New England’s largest retail distributor of truck, van and SUV accessories.

During his spare time, he enjoyed restoring his antique 1946 Mack EH, watching John Wayne movies, listening to the music of Frank Sinatra, hosting the annual Cole family pig roast, and doting on his grandchildren.

In addition to his wife, he is survived by his children, Scott W. Cole of Manchester, NH, Kathryn M. Alonis and her husband Kevin of Merrimack, NH, ,and Jeffrey A. Cole and his wife Allison of Tewksbury; his grandchildren, Katherine, Olivia, Caitlin, and Prayla Cole, and Alexander Alonis; three sisters, Dr. Elizabeth Proper of Hatfield, Carolyn Maggard of Williston, FL and Patricia Allen and her husband Charles of Casco, ME; also many nieces, nephews, and extended family members.

Bill Cole and Yankee Custom has been supplying truck and sport utility accessories to its customers for over 45 years. Once a small company building truck caps from a garage, Bill/Yankee Custom has evolved into a full-line supplier of truck, van and SUV accessories with the largest retail inventory in new England. Bill grew his business to five locations throughout Massachusetts, New Hampshire, and Maine, with his commitment to providing quality products and superior service at the lowest possible price has continued to fuel Yankee Custom's growth over the years. Since day one, Bill had continued to take a hands-on management role.

Bill was also involved in the founding/creation of TORA (then TCIA). In 1990 he served as a speaker at the 1st TORA (TCIA) in Orlando, Fl and has been involved with TORA throughout the past many years.