At least five vehicles have driven more than 400 mph during Speed Week at the Bonneville Salt Flats. Located in northwestern Utah, Bonneville is central to the history of motorsports, where hundreds of land-speed records have been set and broken in a variety of automotive classes. Speed Week began in 1949 and is the largest annual racing event held at Bonneville, with hundreds of teams racing every type of vehicle, from hot rods, roadsters and belly tankers to motorcycles, lakesters and streamliners. In addition to Speed Week, there are four other major racing events at Bonneville during August and September.

While the racing news is positive, the conditions at Bonneville have deteriorated since the 1960s. Today, the salt crust is measured in inches rather than feet, and the 13-mile race track is now eight miles or less. The Bonneville Salt Flats Race Track is listed on the National Registry of Historic Places and managed by the U.S. Bureau of Land Management (BLM). However, SEMA has helped to develop a 10-year program to restore the salt flats to ensure that speed records continue to be made at Bonneville by future generations. SEMA urges the public to contact their U.S. Representative and Senators and ask for their support in funding the measure. 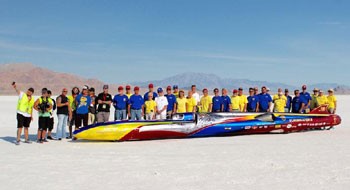