By Clint Simone and George Gabriel

Designating the Most Popular Vehicles for Building in the Automotive Aftermarket

Now in its eighth year, the SEMA Award returns to illuminate the vehicles that SEMA Show parts and accessory manufacturers deem the hottest and most specialty-equipment-friendly. The award recognizes new and emerging trends while also guiding consumers to the most accessory-friendly vehicles in the marketplace.

For 2017, four different automotive brands were recognized by SEMA Show exhibitors, with the Ford F-Series taking Hottest Truck, the Chevrolet Camaro as Hottest Coupe, the Ford Focus as Hottest Hatch, the Jeep Wrangler as Hottest 4x4-SUV, and the Cadillac CTS-V as Hottest Sedan.

'“Every year at the SEMA Show, we see vehicles emerge that are embraced by the aftermarket community,” said SEMA President and CEO Chris Kersting. “SEMA Show exhibitors are at the forefront of the industry and have the unique ability to identify the hottest vehicles emerging for future trends. The SEMA Award recognizes the vehicles that our industry leaders have selected.”

The following pages provide examples of how SEMA Show exhibitors have enhanced these vehicle platforms in numerous ways. 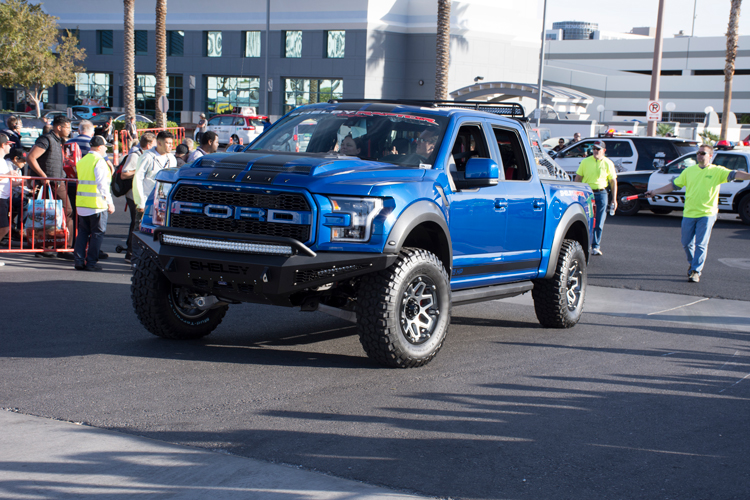 Using a host of performance upgrading parts, Shelby created its interpretation of the ultimate Ford Raptor—the Shelby Baja Raptor. Under the hood is a custom cold-air performance intake system, accompanied by tune, producing 525 hp and 610 lb.-ft. of torque.

Extending the Raptor’s off-road capabilities yet further, Shelby partnered with Fox Racing to create a four-corner adjustable suspension system. The Baja Raptor sits on 18-in. alloy wheels wrapped in 35-in. tires. 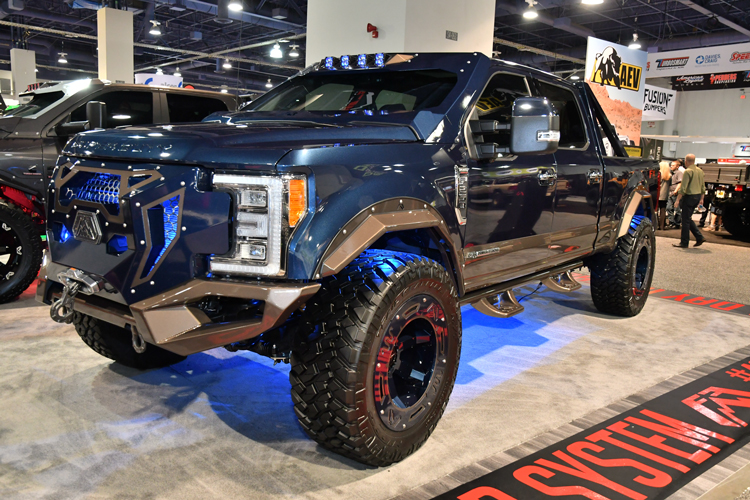 For its booth at the 2017 SEMA Show, Fab Fours Inc. brought several accessorized trucks, including this ’17 F-250 King Ranch Crew Cab. The truck features a 6.7L V8 diesel and a host of exterior enhancements, such as a Fab Fours Truck Grumper front grille and a Fab Fours open fender system that allows the truck to run 40-in. tires. Also included in the upgrades were a Fab Fours Truck ViCowl windshield surround and, finally, Fab Fours paint-matching wheels. 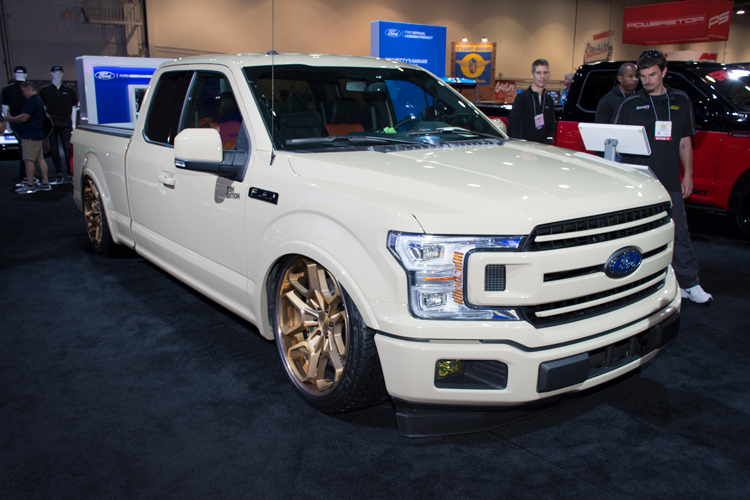 This special edition of the F-150 was built by Neil Tjin of Tjin Edition and brought to the 2017 SEMA Show. The truck is outfitted with a custom Air Lift suspension with Baer brakes and Rocks Custom 24-in. Rotiform wheels wrapped in Falken Tires. The interior was redone in a custom black and orange Katzkin interior, and the performance upgrades include a Ford Racing exhaust. The exterior features a custom Axalta paint job and a Retrax Pro MX tonneau cover. 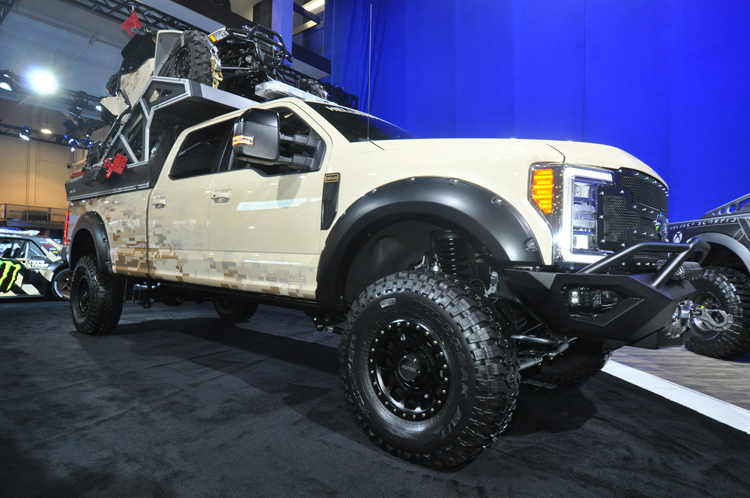 Hellwig Products purpose-built its F-350 Super Duty, dubbed “The Operator,” for use in off-road adventure scenarios both big and small.

The Super Duty features Hellwig Big Wig air springs, an Icon 3-in. lift, Fab Fours Vengeance front and rear bumpers, and Whelen light bars. Stationed prominently in the bed is a Textron Wildcat X LTD UTV. The exterior scheme is not a wrap—LGE-CTS Motorsports painted the truck with a digi-camo theme, using BASF paints in the process. Inside is a SSV Works SXS head unit and speaker cans, Kicker Audio speakers, and a Rugged Radio race radio.

Hellwig chose the F-350 Super Duty as the perfect platform for the Operator, thanks to the Power Stroke diesel engine and the high payload/towing capacity. 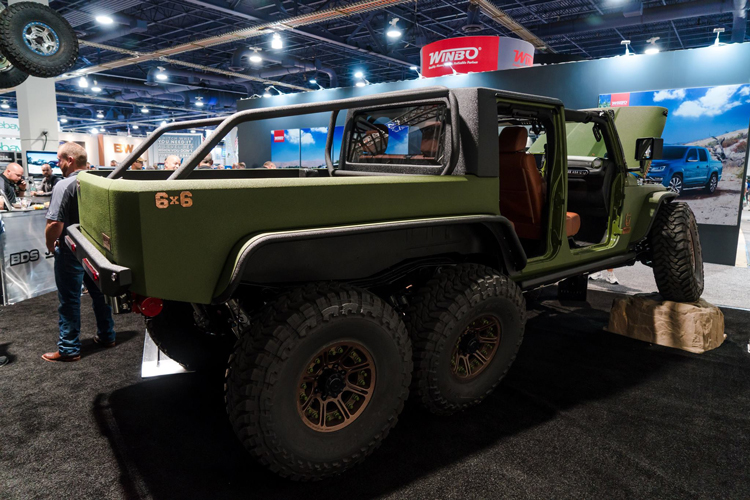 The Bruiser Conversions’ Jeep Wrangler 6x6 breaks the mold in just about every imaginable way. True to its name, the Wranger sends power to not four, but six wheels—a feat accomplished through complex axle engineering. Rather than the standard Jeep engine, Bruiser engine-swapped the 6x6 with an LS3 that produces more than 400 hp. Fox shocks provide spring control for the three-axle rig. In back is a custom wood-panel bed with powdercoated screws to match the wheels. Finally, each of the rear panels was hand-formed to create a rounded, bespoke look. 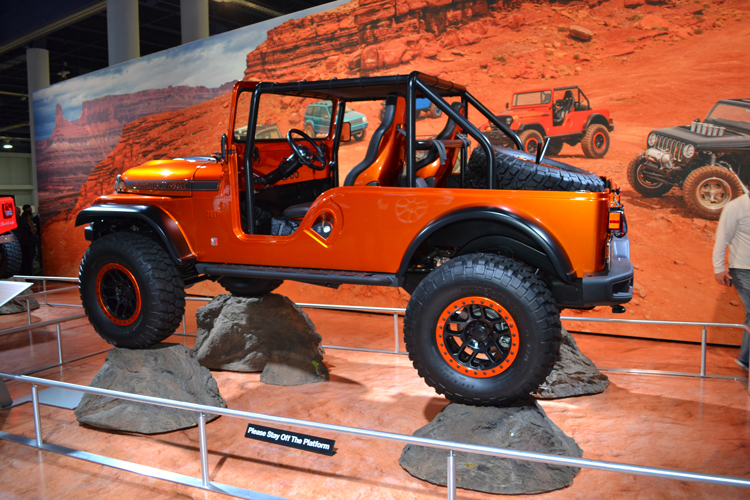 Featured in the MOPAR booth at this year’s SEMA Show was a Jeep CJ66. The narrow-bodied Jeep CJ66 concept uses a 383hp 5.7L Hemi engine mated to a six-speed manual transmission. A MOPAR 345 crate Hemi engine cover shelters the powerplant, and its MOPAR cold-air intake and cat-back exhaust bump up its off-road performance. Front and rear MOPAR Dana 44 crate axles help the Wrangler easily crawl over rocks and boulders.

The Copper Canyon skin is highlighted on both sides with a custom matte-black CJ66 graphic stripe that runs along the side of the hood. The concept hood, bezel and latch also are matte black, as are the iconic seven-slot Jeep grille and the bezels of the Wrangler JK headlamps. MOPAR LED amber fog lamps and a MOPAR Warn winch augment the CJ66’s off-road capabilities. The custom, race car-inspired fuel filler cap is shifted to the inside fender wheelwell. 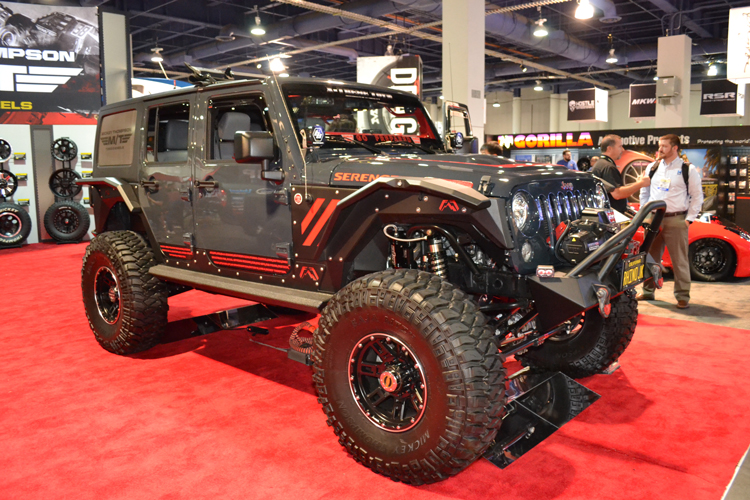 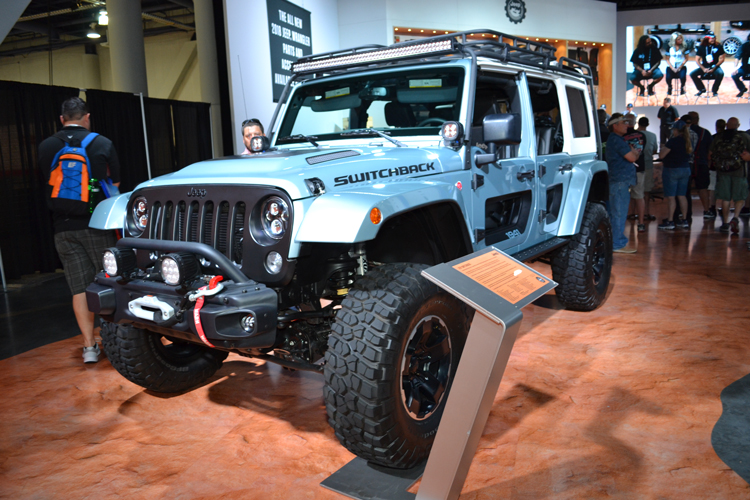 The Jeep Switchback exterior features a concept hood and half doors topped with a concept Safari hard-top and roof-rack system. The exterior also includes Jeep Performance Parts high-top fender flares, a MOPAR black fuel door and taillamp guards, and a Jeep Performance Parts swing-gate hinge reinforcement and oversized spare tire carrier. The Jeep is powered by a 3.6L Pentastar V6 and is mated to a five-speed automatic
transmission. 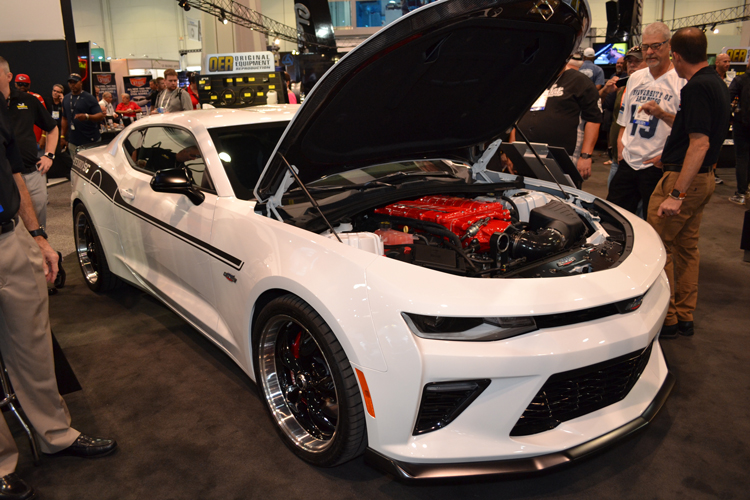 The exterior features include a body-color-painted carbon-fiber hood with a nonfunctional scoop and grille. The hood features a Yenko sYc Stage II stripe and Yenko/SC side stripe graphics in gloss black. Four Yenko-crest exterior body badges decorate the grille, front fenders and rear panel, and a Stage II spoiler badge and 1,000hp hood cowl and spoiler badges round out the appearance. 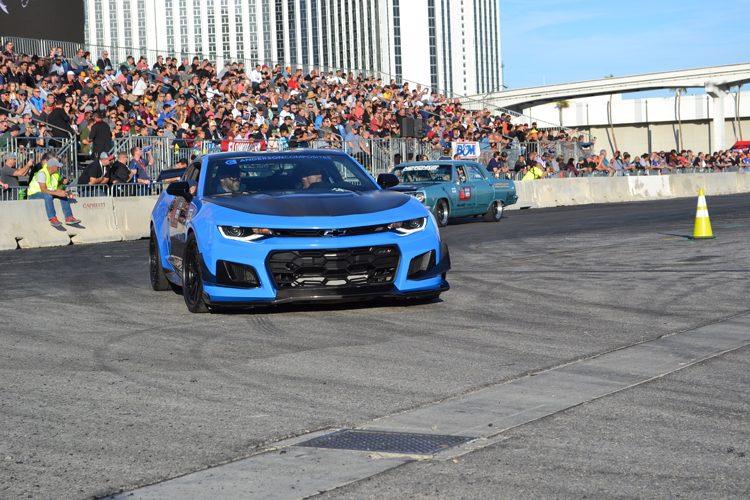 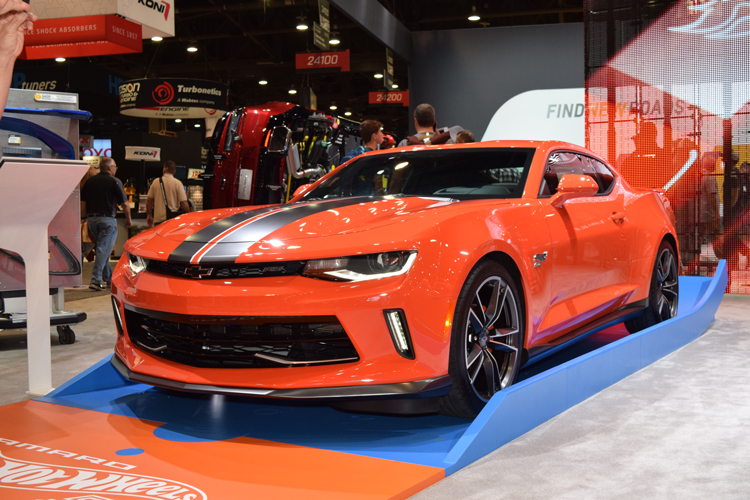 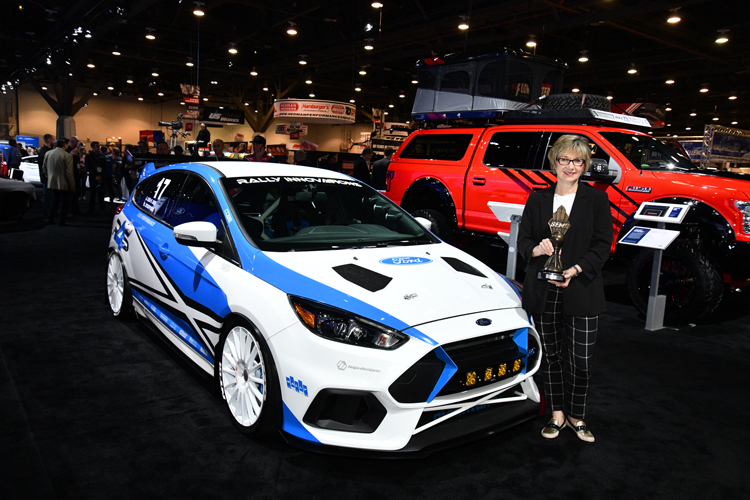 Ford brought a rally-inspired Focus RS to the 2017 SEMA Show. An RS-R coil-over suspension improves ride quality, performance and comfort while reducing excessive vibrations from everyday driving, and it minimizes noises from suspension movements. The Ford Performance short-throw shifter is designed to provide a more direct and connected feel, giving better driving feedback whether cruising local streets or pushing the limits on the track. 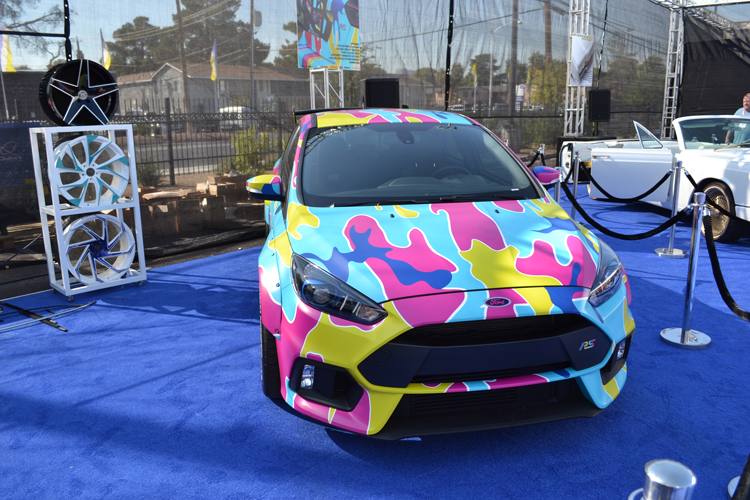 The Ford Focus RS was the perfect platform for West Coast Customs to build on to create a one-of-a-kind hatchback. Featured on this RS are 18-in. wheels by Fifteen52, wide-body fender flares, an Injen cold-air intake, a Cobb AccessPort tune and a custom-printed neon camo wrap. The car was proudly displayed in the West Coast Customs booth at the 2017 SEMA Show.