On Their Way to the Top Time

On Their Way to the Top Time 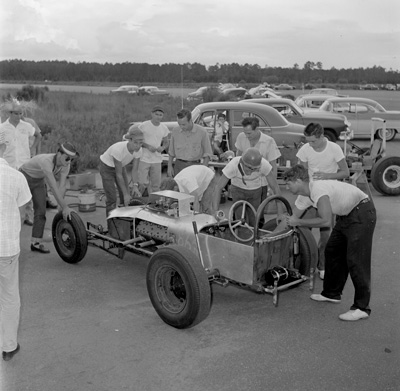 In the mid-’50s, the National Hot Rod Association (NHRA) dispatched its Drag Safari to cross the country, preaching the gospel of safe, organized drag racing and helping local car clubs set up drag races of their own. Everything the Safari team needed to put on a race—from timing equipment to microphones and speakers—was loaded into a travel trailer and towed from coast to coast by a station wagon. (That same trailer, by the way, now enjoys retirement at the Wally Parks NHRA Motorsports Museum in Pomona, California.)

Riding along with the Safari was Petersen Publishing Co. photographer Eric Rickman, who would photograph each race and mail the film back to Petersen’s Los Angeles headquarters so that Hot Rod magazine could dutifully cover each regional event. Those were the days when Wally Parks served as chief of both the NHRA and Hot Rod, and he utilized his national forum in the pages of the magazine to lift the image of drag racing and its racers above the four-wheeled hoodlum stereotype that pervaded other forms of media at the time.

In September 1955, the Safari stopped at the Lake City Airport outside of Jacksonville, Florida, to help the North Florida Roadster Club stage a drag race. Nearly 150 entries turned out from Florida and surrounding states, racing in classes that ranged from Stock to Dragster.

The busy crew shown in the photo is helping W.D. Roberson (in the helmet) ready his Ford Flathead-powered dragster for a run. The slingshot’s bodywork may look a little crude to 21st-century eyes, but the engineering beneath the paneling was effective: Roberson set the meet’s “top time the first day with a 108.69 mph best run,” said Hot Rod.

However, that speed wasn’t enough to hold off another Florida hot shoe at the race. Don Garlits won the Dragster class and went on to beat Joe Travis’ Oldsmobile-powered Open Gas Dragster for Top Eliminator honors.