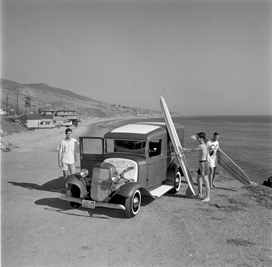 Well, not really, if you look closely at the Malibu shore in the background. But Eric Rickman’s November 1962 photo shoot of John Wileman and Dave Smith’s ’34 Ford panel truck was riding a wave—sorry, couldn’t resist—of an exploding interest in surf culture. And hot rodding was along for the ride.

Sandra Dee’s Gidget may have introduced much of the country to Southern California’s surfing scene in 1959, but it was the Beach Boys who really cemented the dream of warm sun, California girls and perfect waves in the American imagination. Their first album, Surfin’ Safari, was released the same month as Rickman’s photo shoot, with “Surfin’ U.S.A.” to follow four months later. The first of American-International’s Annette Funicello and Frankie Avalon beach movies, Beach Party, came out in August 1963, just a couple months after Hot Rod magazine ran the panel truck in its June 1963 issue.

“Dave Smith and John Wileman have two loves—surfing and hot rodding,” read the story’s subtitle. “As it turns out, one sport just naturally goes along with the other.”

Brian Wilson and company must have felt the same way: “409” was the B side of the Beach Boys’ first single, and Chili Catallo’s now-famous Little Deuce Coupe was featured on the cover of the Boys’ fourth album—after being on Hot Rod’s cover in 1961.

Smith and Wileman (photographed with their friend Chuck Carter, wearing the Moon T-shirt) found their truck in an old barn, painted it Tahitian Bronze, and mounted 15-in. wheels with Kelly whitewall tires. The truck’s rake is courtesy of a 3-in. dropped front axle. The Mercury Flathead V8, nicely framed by the bright white firewall, was hopped up with Fenton heads and a Weiand intake mounting three Stromberg 97 carburetors. Inside, the guys dressed the cargo area with rosewood paneling and sat on bucket seats out of an MGA.

The quintessential surf wagon may be a woody, but this panel did the trick for these Pacific Palisades guys and their Con surfboards.