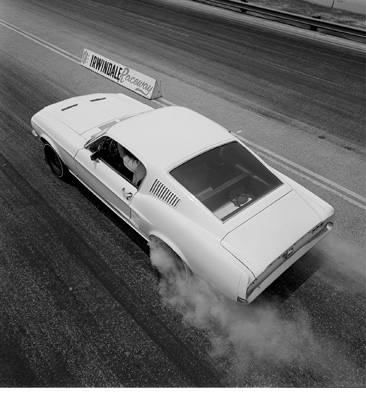 “No machine work, no sending out parts to be balanced, no tricks; just pry open some boxes and start bolting equipment on, in an effort to obtain a quicker and faster car.”

John Thawley, writing in the September 1967 issue of Hot Rod magazine, perfectly described that ever-elusive Holy Grail of car mods: bolt-on horsepower. Ford lent the magazine a brand-new (1,300-mile) ’67 Mustang with a two-barrel-carbed 289, a C4 automatic transmission and 3.50 gears. Thawley used the chassis dyno at Ak Miller’s Garage to measure the V8’s output and a number of Southern California dragstrips to put his mods to the test.

Thawley next swapped the two-barrel carb for a stock Autolite carb and a Ford four-barrel intake, bringing horsepower to 114 and knocking two-tenths off the car’s e.t.

A high-rise intake manifold from Shelby American fitted with a Holley 715-cfm carb brought power up to 118 and the e.t. down to 15.82, but Thawley found that the engine would bog and sometimes die if he matted the gas pedal at launch without breathing help from a better cam and headers. So he switched to a 600-cfm Holley and found the car’s drivability much improved, even if the dyno and strip timers didn’t concur (115 hp, 15.91 e.t.).

Thawley expected big changes when he replaced the stock exhaust with Shelby headers and Thrush mufflers. But when that didn’t happen, Miller and his crew discovered that the “California-sold car” had exhaust-port restrictions (thanks to the state’s mandated emissions equipment) that would negate any improvement from the headers.

When Jerry Kugel swapped the 3.50 gears for a set of 4.50s, “we would have sworn he had swapped cars on us,” Thawley wrote. “The shifts came quick and hard, gas mileage fell to 10 miles to the gallon from the previous 20 mpg, and at freeway speeds, the tach was showing 4,000 rpm.”

On the strip, the change made an impressive improvement: 15.10 at 91.46 mph. The new gearing also caused the engine to rev higher, which bent one of the stock valves. With the heads off to make the repair, a Shelby cam, lifters and springs were installed.

Thawley wasn’t done yet. On the drawing board were a solid-lifter cam, new pistons and talk of adding one of Shelby’s superchargers. The sick transmission would need to be sorted out before it could make use of all those changes, but “with a little transmission work and a little fine-tuning, a ‘Shelbyized’ Mustang ought to do all right in the local plowing contests.”