50 Years of the SEMA Show 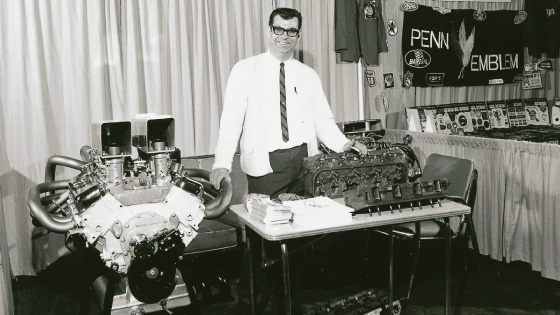 Before there was a SEMA Show, there was an association—a loosely knit group of speed-equipment manufacturers who came together with a common interest. It was the Speed Equipment Manufacturers Association’s shared obstacles to building their businesses that brought them together, and the foundation of the industry was born.

The marketplace that evolved at previous trade expos was defined by “The High Performance & Custom Trade Show,” held under the cold, damp Dodger Stadium grandstands in 1967.

Booths were simple: a card table, a few chairs, some pipe and drape. One of the 100 exhibitors that year was Valley Head Service, and the booth was manned by Larry Ofria, pictured above. It was the second year in business for Valley Head Service, whose early activities included porting cylinder heads for the likes of Carroll Shelby, Mickey Thompson and Smokey Yunick.

“I think we did very well,” recalled Ofria of that first Show. Today, he still picks up the phone at Valley Head Service, now in its 51st year. The company, still located in the San Fernando Valley, has always been there to “fix the broken, resurrect the old, make the new better and the fast go faster.”

As it turns out, an entire industry would spawn around those same ideas, and time and time again as the years rolled on, the SEMA Show would provide new businesses the opportunity to succeed by starting out with a table, two chairs and some pipe and drape. 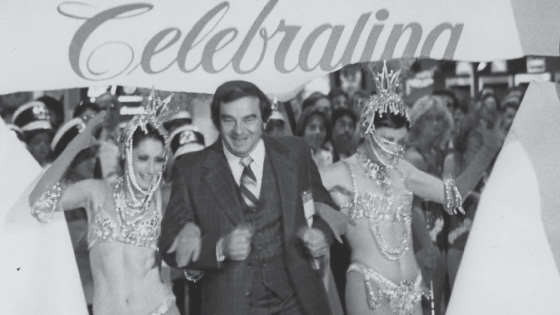 In the 1970s, the name of the association was changed to Specialty Equipment Market Association to more appropriately describe the growing mix of companies involved and their activities—including retailing and distribution.

During this era, the Show moved twice—first to the Anaheim Convention Center and then, during Leo Kagan’s term as president, to Las Vegas in 1977. The Las Vegas Convention Center had opened in 1959 with a 20,340-sq.-ft. rotunda, 18 meeting rooms and a 90,000-sq.-ft. exhibit hall. Kagan’s vision proved inspirational. The new venue, characterized at first by some as a risky gamble, was quickly greeted with exuberant enthusiasm by the industry. In this photo, SEMA president Chuck Blum opens the 1979 SEMA Show in classic Las Vegas style. 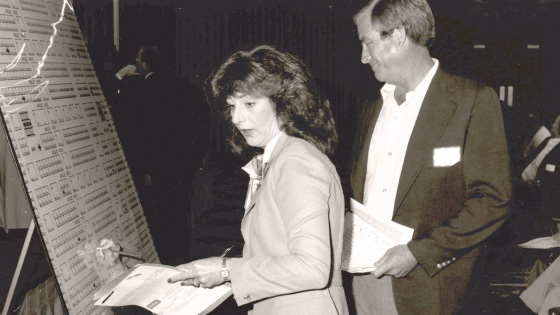 In the 1980s, SEMA Show operations were driven by manual processes, and that included booth selection. In the photo above, Show Director Virginia Demos and Vic Edelbrock Jr. supervise the days-long event that allowed each exhibitor to pick in turn, writing in their choices on a map with grease pencil. As the Show grew, this cumbersome year-after-year process was eventually replaced by the electronic booth-selection process used today.

The turmoil caused by the gas crisis of the late 1970s, the transition to unleaded fuel and new government regulations did not stifle the industry. In fact, it set the stage for industry/association collaboration unprecedented in the automotive aftermarket, resulting in the consolidation of industry shows and a new round of innovation.

This era included several important milestones. In 1983, the import-parts section of the SEMA Show was added under the auspices of the Automotive International Association, thus changing the name to the SEMA/AI Show. In 1984, there was a combined SEMA/AI/APAA Show in Las Vegas. The Industry Awards Banquet was held at the MGM Grand, and entertainment was provided by The Platters and Gallagher.

At this point, by all indications, the move to Las Vegas had proven an overwhelming success. In 1986, Car & Driver magazine noted that the Show was a “…prime opportunity to monitor the West Coast car culture without breathing the smog or fighting the freeways.” That same year, Jay Leno made his first appearance on stage at the SEMA Show Industry Awards Banquet. 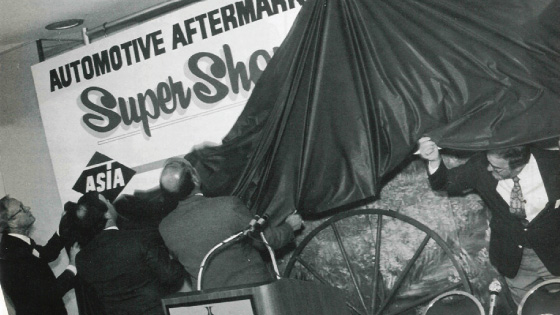 Above, a 1990 cover of SEMA News captured Chuck Blum, Gene Gardner, John Reiss and Mike Warn as they unveiled plans for “The Super Show.” Those plans became a reality in 1992, when the SEMA/AI Show and the Automotive Service Industry, Motor & Equipment Manufacturers Association and Automotive Parts & Accessories Association (ASIA/MEMA/APAA Show) came together to form Automotive Aftermarket Industry Week (AAIW) in Las Vegas. The two shows together boasted in excess of 1.6 million sq. ft. of exhibits. As today, two simultaneous exhibit facilities created an all-inclusive, one-stop exposition for the entire automotive aftermarket, with shuttle busses linking the two.

In 1998, the SEMA Show broke the 500,000-sq.-ft. mark with 502,912 net sq. ft. of rented space. Each year since then, the Show has set new records of some sort. It now occupies more than 1 million net sq. ft., draws more than 3,000 media, and has a buyer attendance in excess of 60,000. The SEMA Show also now routinely brings together more than 2,500 exhibitors, and total attendance at the Show now tops 160,000 manufacturers, buyers and other industry representatives who convene in Las Vegas to make contacts and do business. 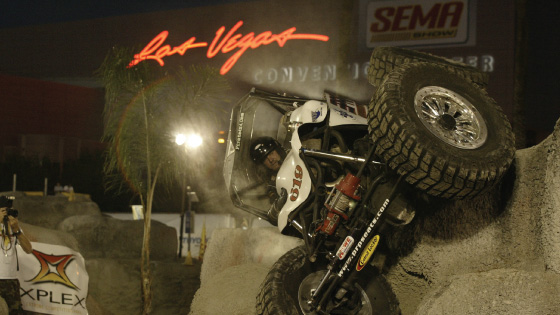 In the decade starting with the year 2000, the SEMA Show added a wide variety of events and features and again grew as two new sections were created—Paint & Body and Powersports.

The photo above was taken in 2004, by which time the Show had evolved to include product demonstrations that allowed attendees to not just see new products but also observe them in action and, in some cases, to experience those products for themselves.

One such event was the Off-Road Proving Ground, in which professional drivers demonstrated the specialized equipment that enabled rock machines to tackle steep, rugged terrain. Other experiential events, such as the Installer Challenge, allowed buyers a chance to put their hands on new products and gain an understanding of fitment and the latest installation processes.

Coming just a few weeks before the 2001 SEMA Show, 9/11 was a devastating event in many respects. Nevertheless, the Show went on as the industry built upon momentum generated by a new awareness of best practices in internet marketing, new technology and innovation. By the middle of the decade, fuel prices had shot up alarmingly, and manufacturers responded by displaying parts based on technologies to make vehicles lighter, more aerodynamic and more efficient without giving up performance. These advances would ultimately lead to the smaller, highly boosted engines we see today.

In the latter part of the decade, specialty-equipment manufacturers expanded into a global footprint, weathering a prolonged recession in part by turning to exports, as buyers from all over the world made the Show an international affair. 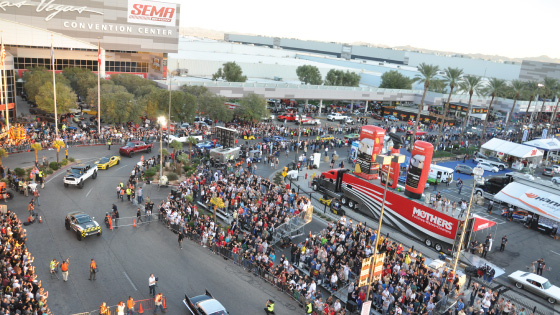 By 2010, the SEMA Show had become conspicuous to automotive enthusiasts around the world, and the Show’s strict trade-only admission policy only increased their fascination. An underground phenomenon emerged when in-the-know enthusiasts took to social media to post sightings of the custom cars that emerged Friday from seclusion behind the walls of the Las Vegas Convention Center.

Sensing an opportunity in 2011, SEMA Show management experimented with a more structured exit parade of booth vehicles and, in spite of rain, thousands of consumers materialized with their cameras, generating millions of clicks, likes and page views. The SEMA Cruise was born, creating a new opportunity for the trade to intensify interactions with consumers.

The photo above, taken in 2013, documents the evolution of the SEMA Cruise. SEMA Ignited, which has expanded consumer awareness and allowed exhibitors to leverage their SEMA Show investment was launched in 2014.

As the decade progresses, the SEMA Show celebrates its 50th anniversary, pausing for a moment to look back to a time when 100 manufacturers gathered under a dark, damp stadium to offer new ideas that fit a particular need or made a vehicle better, safer or more fun to operate. Those pioneers and the thousands of companies that make up the industry today can point to today’s SEMA Show and truly say: “We built this.”