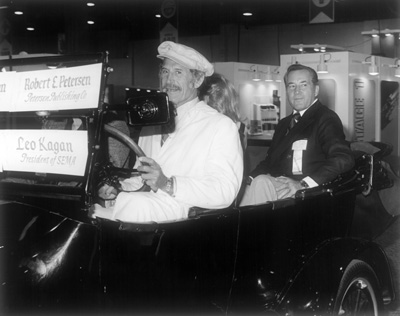 It’s 1978, and then-SEMA President Leo Kagan is driving an antique car onto the floor of the SEMA Show in just its second year at the Las Vegas Convention Center. In the back seat of the car are Robert and Margie Petersen, who were instrumental in producing the very first SEMA Show back in 1967.

For anyone who has only gone to the SEMA Show in Las Vegas, it may be hard to imagine what the Show was like in its earliest years. That first Show, called the High Performance and Custom Trade Show, was held under the bleachers at Dodger Stadium in January 1967. One hundred exhibitors set up tables and drapes to display their speed parts and accessories to about 3,000 attendees. (By comparison, the 2015 SEMA Show drew some 60,000 buyers.)

SEMA realized immediately that its trade show needed room to grow, so it moved to the Anaheim Convention Center in 1968, which offered plenty of room for the 140 exhibitors and nearly 4,000 attendees at that second event.

Yet with the explosive growth of the automotive aftermarket in the ’60s, even that big space couldn’t hold the Show for long. By the first year of his SEMA presidency, 1975, Leo could see that the Anaheim facility couldn’t accommodate all the aftermarket companies who wanted to display at the Show. So he started to research other venues and submitted a proposal to the SEMA Board to move the Show to Las Vegas.

Not everyone was on board with the idea. In fact, Leo remembered, there were people who said moving the Show would “be the ruin of SEMA,” since a large percentage of its member companies were based in Southern California, and they would balk at having to ship their displays and parts to Vegas.

It took two years of planning and negotiations, but the Show finally left the bursting-at-the-seams Anaheim Convention Center for the far more spacious Central Hall of the Las Vegas Convention Center in 1977. Leo’s plan for expansion paid off big-time. And those nay-sayers? “They came to me after the Show and apologized,” he said with a laugh.

This year, then, marks some important anniversaries in SEMA’s history: It’s the 50th SEMA Show and the 40th in Las Vegas. And Leo? He celebrates his 100th birthday this year by taking his 50th consecutive trip to the Show. Wish him well when you see him.