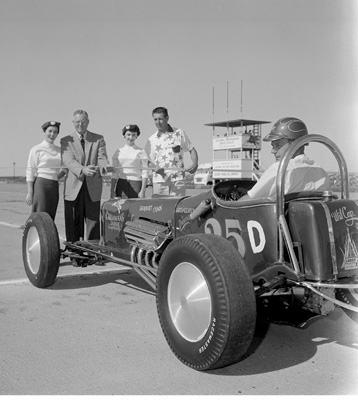 In late September of 1955, the NHRA staged its first-ever National Championship Drag Races in Great Bend, Kansas. The first car to make a pass at this historic event was Art Chrisman’s Hemi-powered no. 25 dragster. That’s Art in the cockpit as dignitaries (including NHRA founder Wally Parks, at right) perform the event’s ribbon-cutting ceremony.

On just his second run down the concrete quarter-mile, Chrisman hit a top speed of more than 145 mph, a mark that would remain the highest of the meet—for single-engine cars, anyway. (The Howard & Weiand twin-engine Bustlebomb dragster would later run 151.)

This was by no means the first—or last—time Chrisman would make history in a fast car. He grew up in a fast family, working at the Chrisman and Sons Garage in Compton, California, with his father Evert and brother Lloyd, while his uncle Jack (a history-making racer in his own right) ran a service station nearby. Behind the wheel of Chet Herbert’s Beast streamliner in 1952, Chrisman became the fifth member of the Bonneville 200 MPH Club with a 235-mph run.

His no. 25 dragster—a converted dry-lakes race car—was the first to eclipse 140 mph in 1953; before the end of the decade, he would become the first man to exceed 180 mph in his Hustler I dragster, and he also piloted the Hustler to Top Eliminator honors at the very first United States Fuel & Gas Championships in Bakersfield (now known as the March Meet).

After a number of very busy years racing on dragstrips and at Bonneville, Chrisman went to work for Ford’s Autolite division, where his years of competition experience helped other racers. He later continued his family legacy of speed by opening Chrisman’s Auto Rod Specialties with his son Mike. Among their earliest projects was the restoration of Chrisman’s historic Hustler I.

Chrisman’s achievements in a race car landed him in the 29th spot on the NHRA’s list of Top 50 Drivers of all Time. His accomplishments also earned him membership in the Motorsports Hall of Fame, the Robert E. Petersen Lifetime Achievement Award, and induction into SEMA’s Hall of Fame in 2011.

Chrisman passed away in July at age 86 after a years-long struggle with cancer. But he lives on, in a way, as part of the Wally Parks NHRA Motorsports Museum’s Gallery of Speed display in the museum’s lobby. A lifesize sculpted likeness of Chrisman stands next to the Beast that he raced at Bonneville, while nearby is the no. 25 dragster, ready to launch as a sculpted starter drops his flag.